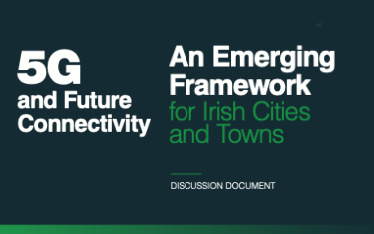 The pace of technological development is breathtaking. Perhaps the most illustrative example of this is the smartphone. Over the course of the last decade, its proliferation has transformed how we interact with one another and spawned entirely new industries. Indeed, for many, the smartphone has become the sole gateway to the Internet and its vast repository of information.

But, simply put, the smartphone could not have succeeded on its own – fundamental to its ascension has been the advancement of mobile networks in the form of 3G and 4G LTE. The latter technologies enabled functionality beyond simple voice and text, delivering the performance required to enable new applications such as video calling and streaming.

The next generation of mobile network technology – 5G – is now in the early stages of commercialisation in Ireland and across the world. Its potential lies in the fact that, for the first time, it is designed to cater to form factors beyond the smartphone, connecting the disconnected around us – sensors for air quality, river level and congestion monitoring.

Dublin City Council has long recognised the importance of future-proof connectivity for Dublin and its citizens. In 2018, this recognition manifested itself in the decision to apply for funding from the Department of Public Expenditure and Reform’s Public Service Innovation Fund to develop a discussion document that would examine the challenges and opportunities associated with 5G deployment in Irish cities and towns.

The council was successfully awarded €30,000 and embarked to bring together the telecoms industry, academic experts, local authority staff and other public-asset others in its two-year examination of 5G. In 2020, the culmination of this work was the publication of the “5G and Future Connectivity” discussion document to provide a framework for local authorities.

Traditionally, local authorities have played a passive role in facilitating the deployment of mobile network infrastructure within their administrative regions. In most cases, this role was limited to reviewing and accepting or refusing planning applications for the installation of antennas and supporting telecoms equipment on rooftops or lattice and monopole structures.

The lack of coordination between stakeholders such as mobile operators, infrastructure providers and local authorities in the design, planning and deployment phases has produced a number of unfavourable outcomes for citizens. The most pertinent of these outcomes is, perhaps, the existence of a digital divide in areas underserved by commercial telecoms operators.

Based on learnings gained from Dublin City Council’s parallel efforts to create a state-of-the-art 5G testbed in the Docklands with Dense Air, it quickly became clear that much of the shortcomings in terms of network quality could be attributed to the challenging economics faced by mobile operators. With stagnant or declining revenues, increased capital investment in network infrastructure was, and still is, not viable.

The 5G testbed also highlighted the reality that local authorities will need to provide access to their assets in order to support the deployment of small cell infrastructure. Unlike previous generations of mobile network technology that were mostly based on low-band spectrum, 5G is being deployed in higher frequency bands in order to provide a dramatic capacity increase.

Unfortunately, the utilisation of such spectrum introduces a major drawback – reduced propagation distance. If mobile operators are to provide contiguous 5G coverage across cities, both indoors and outdoors, they need to deploy more radio sites and in much greater densities. The only way to achieve a high level of network density is to radically reduce the size of these sites (referred to as small cells) so that they can be installed on street furniture such as lighting assets, bins and bus stops.

It was obvious to the council, however, that there were significant challenges and barriers to the deployment of small cells on local authority assets. This was exacerbated by the lack of alignment at local and national levels, which would be critical to ensuring that Ireland could maintain its economic competitiveness in a world dependent on connectivity.

Dublin City Council identified an opportunity to capture the values, benefits, concerns and challenges related to 5G in the form of a discussion document. This document, entitled “5G and Future Connectivity: An Emerging Framework for Irish Cities and Towns”, was developed with the goal of enabling local authorities across Ireland to consider the implications of 5G on their future planning and development policies. 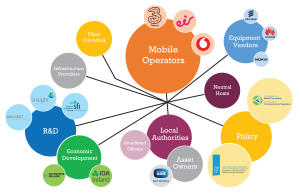 The document encapsulates the role of local authorities and the numerous deployment barriers that exist, from power to fibre and planning challenges. These findings are based on the council’s first-hand experience gained from the 5G testbed in the Docklands, as well as from insights provided by industry and academic experts.

A key consideration for local authorities will be pursuing the optimal deployment model for small cells to minimise visual pollution, clutter and urban disruption. Each of the models, including the neutral host model pioneered with Dense Air in the 5G testbed, is evaluated in the discussion document. 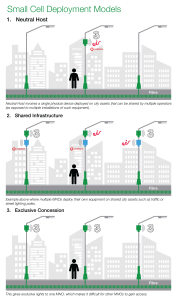 Importantly, the document also notes the most current scientific advice in relation to the health effects of 5G and outlines the various monitoring programmes in place. It is concluded with a suite of recommendations to support the rollout across Ireland, in addition to a five-year roadmap to better guide the country’s 5G connectivity vision.

As envisioned from the outset, the discussion document is now stimulating debate and action from all stakeholders in the 5G ecosystem. More recently, for example, Dublin City Council and Smart Docklands convened the first meeting of the 5G Working Group, which is composed of stakeholders from government departments and agencies, regulatory bodies and other relevant companies. 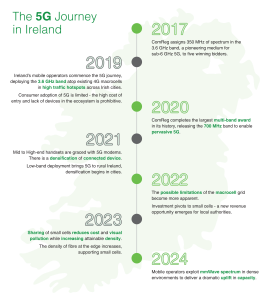 The discussion document continues to inform the council’s connectivity plans. It has prompted internal restructuring to help accelerate the 5G agenda, and enhanced coordination with fellow local authorities in Ireland to streamline operational needs. There is now a better understanding of the value of 5G and the challenges that need to be overcome in order to capitalise on its benefits.

The discussion document was funded and supported through the Digital Innovation Programme which is administered by the Department of Rural and Community Development.