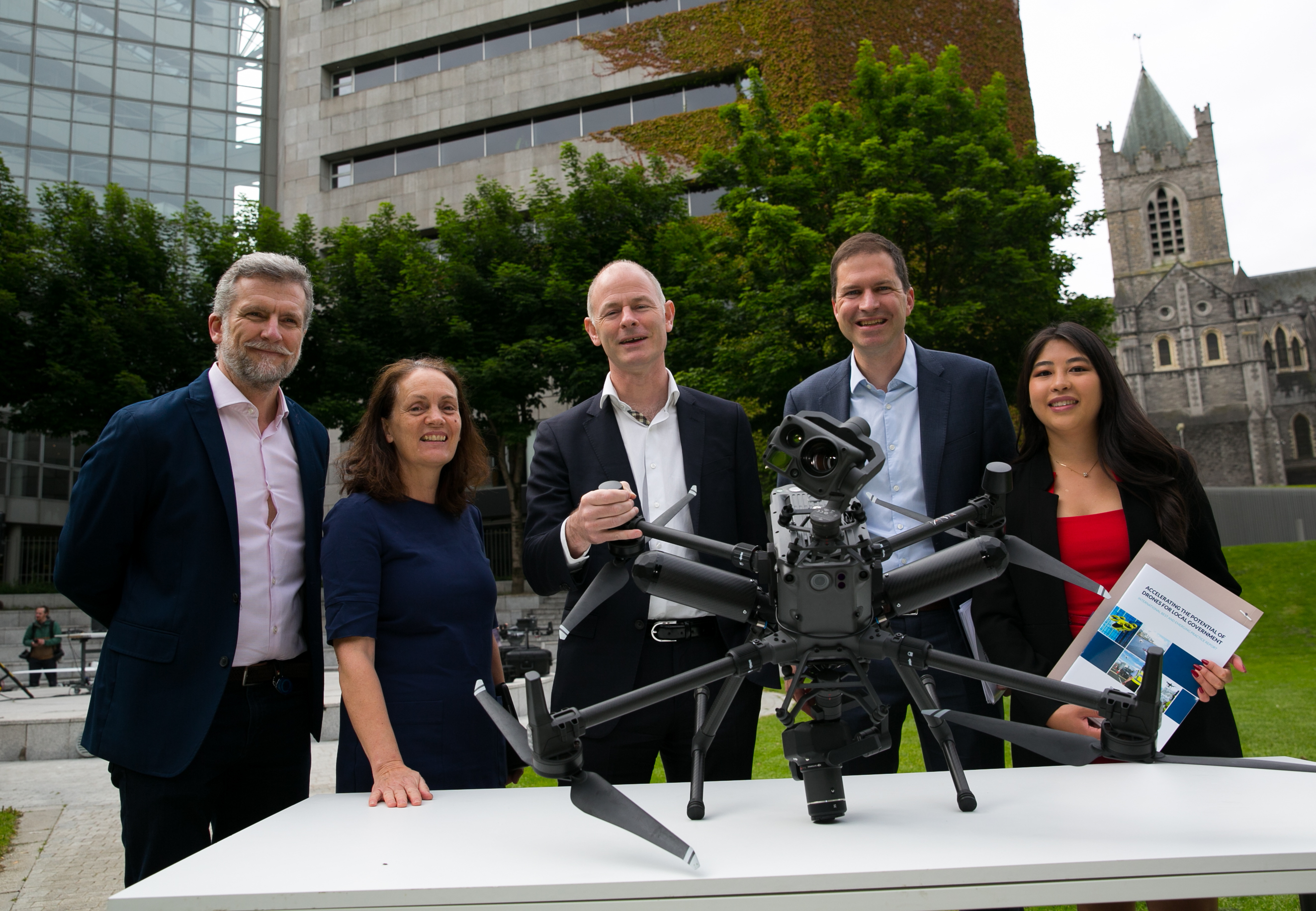 After months of exploring and identifying the potential of drone technologies for local government, Tuesday 15th June marked a milestone for the future-proofing of Dublin’s skies. Taking place in Wood Quay Venue, the Dublin City Council’s (DCC) Smart Dublin team, in collaboration with the Irish Aviation Authority (IAA), the Local Government Management Association (LGMA), and Maynooth University, formally launched the International Best and Emerging Practice Report which details the numerous opportunities stemming from increased usage of drones in the city.

As cities grow in size, population, and complexity, new technologies are required to ensure effective city management while maximising the quality of life for all citizens. Drones are increasingly being recognised as vehicles through which this can be achieved, with civil defence, emergency response units, and environmental monitoring applications increasingly advocating for the use of drone technology in the city.

Co-funded by the Public Service Innovation Fund, the report stems from DCC’s ‘Accelerating the Potential of Drones for Local Government’ project. With support and input from local authorities, leading drone experts, academics, and industry, the project investigated the emerging trends and opportunities for drone applications in the public sector. Importantly, one of the project’s core workstreams focused on establishing trust, compliance, and clear safety regulations for the use of drones in both the public and private sector.

As part of this workstream, the project’s steering group developed and circulated a national omnibus survey to capture citizens’ opinions, hopes and concerns relating to the roll out of drone technology across local authorities. With over 900 participants, the survey results were overwhelmingly positive. Some 97% of respondents felt positive about the potential use of drone technology for emergency response services and a further 84% felt optimistic about the use of drones in a more general sense. Respondents equally identified challenges relating to the roll out of drones in our towns and cities, most notably privacy concerns. With such a successful response rate from citizens, the results from this national survey comprised a central component of DCC’s final report and will continue to inform future drone policy across the public sector.

Following a successful launch, DCC, along with its collaborators, will continue to work on the ‘Accelerating the Potential of Drones for Local Government’ project. Having already developed a series of case studies, online learning materials and workshops for the public and private sector, the project and its accompanying report will accelerate new opportunities and innovation potential for drones while tackling national and local issues.

Such sentiments were further underscored by Minister of State for Public Procurement and eGovernment, Ossian Smyth TD, stating:

“I am delighted to see organisations such as Dublin City Council, the Local Government Management Association (LGMA), the Irish Aviation Authority (IAA), Maynooth University and others come together to think about current and future applications of drone technology and to map out how we can all collaborate to maximise the benefits of these technologies. The DPER Public Service Innovation Fund (PSIF) was designed to support projects like this that are driving innovation across the sector.”

————
Click on the following links to find out more about DCC and Smart Dublin’s drones initiatives.